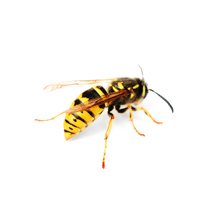 Two of the most common pest problems are wasps and ants nests. We are specialists in the pest control of wasps and ants – if you have a problem then give us a call to arrange a visit. This handy site helps to identify the various species.

There are six species of wasp commonly found in the UK but only two enter buildings. Wasps can be seen throughout the country but the wasp ‘season’ tends to be shorter in the cooler north.

Wasps build elaborate nests made from a papery substance. This is produced when workers mix wood scraped from trees, fence posts or materials scraped from dried grasses with saliva. Nests can be located hanging from trees, bushes and hedges, or beneath roof tiles, in attics, garages, etc.

A wasp nest survives only for that season as the nest dies off in the late autumn, and although they will never re-inhabit an old nest, they may build a new one directly beside an old nest. At the height of the season, there may be as many as 25,000 wasps in a very large nest!

The Black garden ant is to be found throughout the UK, particularly where soil is of a sandy nature. It is common around homes and the workplace, the worker ants entering through cracks in brickwork and around windows in search of food.

These ants follow trails, so when a rich source of food is found, this information is communicated back to the nest resulting in large numbers of ants following a trail from the nest back to the food source. Nest openings can be distinguished by small piles of fine earth.

Although not known to carry any diseases, most people would rather discard than use food which has been fed on by ants.

One of the most common calls we get, particularly during the summers is related to Wasps and Ants. If you are currently experiencing any sort of wasp or ant problems and need some pest control of wasps and ants then give one of our friendly team a call on 07850 839655 or 020 8300 3496, to arrange a visit from us.