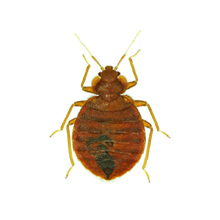 One of the most common pest problems are beetles, in all their forms. Check out wikipedia for a description of the different types.If you are in need of pest control of beetles then we can help.

The Larder beetle is one member of a group of insects commonly known as Dermestid beetles. These insects attack animal furs and feathers, and feed off meat scraps found behind and beneath units in meat processing plants, renderers, butchers, fishmongers, delicatessen counters in supermarkets and, of course, beneath and behind cookers and refrigerators in the kitchen. Dermestid beetles fly and most are attracted to ultra-violet light emitted by electric fly killers.

They are particularly important pests of museums, where collections of stuffed animals can be destroyed. In this case fumigation should be considered.

Of the 400 species of spider beetles, 14 are known in the UK and the Australian spider beetle is now one of the most common and widespread pests of stored products and miscellaneous food debris. The adults avoid light and feign death when disturbed.

Spider beetles are so-called due to their appearance when viewed from above. Although all insects have only six legs, the long antennae of the spider beetles gives the impression of another pair of legs and thus of a spider.

Very common in old birds’ nests, but may also be found in stores, larders and warehouses, living more as a scavenger of miscellaneous debris including a wide range of dried materials of plant and animal origin.

Sometimes called Psocids, these insects are common resident pests in libraries, homes and warehouses; often occuring in stored foods. Psocids feed principally on microscopic moulds on damp materials (glues, books, paper, wallpaper, wood and plaster) and also live on foods with a high vitamin B content. They are common pests of new houses where wood and plaster is still damp. Despite their name, booklice do not bite.

When valuable books or other items are infested, fumigation will control booklice without damaging the articles.

One of the most common calls we have is about beetles. If you are currently experiencing any sort of beetle infestation and need some pest control of beetles then give one of our friendly team a call on 07850 839655 or 020 8300 3496, to arrange a visit from us.