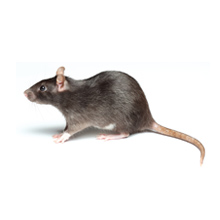 The use of the phrase pest control of rodents, covers a whole range of creatures, in this section we’ll take a closer look at the common house mouse, brown rat and black rat.

The House mouse is a worldwide pest of buildings.
They are nocturnal creatures and are extremely inquisitive, exploring their surroundings mainly by
touch as their eyesight is not particularly good.

A mouse can produce up to 80 droppings in 24 hours, so food and food preparation surfaces can easily become contaminated even when only a small number of mice are present.

Probably the most important disease that can be transmitted by mice in the UK is Salmonella food poisoning.

Also known as the Norway rat, Common rat or Sewer rat. It is a worldwide pest of industrial, commercial and domestic premises. It can be a major pest on some farms, where warmth, food and a source of water are easily found. Like the House mouse, this animal is nocturnal, but the Brown rat is very wary of new objects and is said to be neophobic (fear new things). A single Brown rat may produce up to 40 droppings in 24 hours so the contamination potential of these animals is high.

Brown rats are capable of carrying several diseases, amongst which, in the UK, are Salmonella food poisoning and Weils disease (Ieptospiral jaundice).

Also know as the Ship rat or Roof rat. Again, this animal is nocturnal as with the other species of pest rodents. It can be found worldwide but distribution in the UK is very limited and is normally restricted to areas around large ports. It is a major pest of ships. This rat was responsible for spreading (via fleas) the Bubonic Plague throughout Europe in the Middle Ages. Fortunately in the UK, this disease does not exist, but can still be found, to some degree, in many other countries around the world.

If you are unsure what type of rodent you have, this site gives a really good explanation of the differences between them. If you are currently experiencing any sort of rodent problems and need some pest control of rodents then give one of our friendly team a call on 07850 839655 or 020 8300 3496, we might be able to help with some free advice or if needed you can arrange a visit from us.